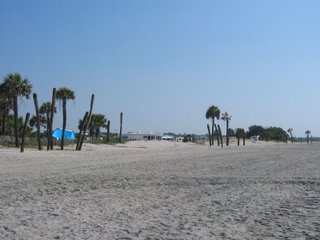 We have been wanting to try Edisto Beach State Park for quite a while. Back in February I tried to make reservations for a beach campsite and was only able to get a few week days. Thats when we decided to go to Charleston for the weekend then move to the beach.

We left OPC at about 10 AM and arrived at Edisto SP at about 11. But check in time is not until 2:00 we were told. The registrar let us unhook the Tracker and go check out the site we had reserved; #44. Yea.. it was empty. The previous campers were already gone, so we could move in. 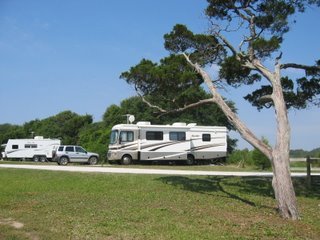 Backing in was no problem and in no time we were on the beach trying out our new umbrella. Pam bought it at the Umbrella Factory near Rockingham NC and it worked great. Hopefully it will last quite a while.

It was rather windy so late afternoon brought a slight chill with the wind comming off the water. We decided to go ride around the island a little and check out a place to get some seafood. Again I call on Roadfood.com and Michael Stern's strong recommendation of the Old Post Office. 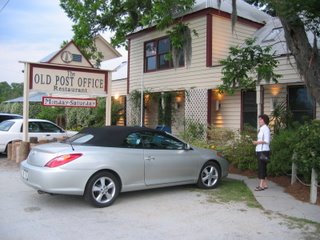 This is an outstanding upscale restaurant with top notch food. Crabcakes were great! It is a meal to remember.

After another cruise around this beautiful island, it was back to our campsite for a late walk on the beach and watching the sunset over the salt marsh right behind our camper. What a beautiful campground this is! 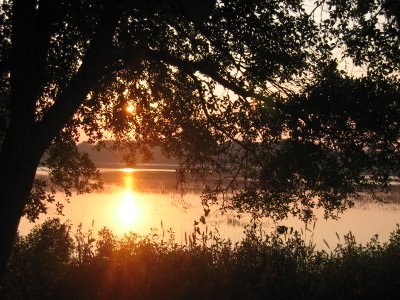 Tuesday was another beautiful day, and we literally spent the whole day on the beach. Reading, watching the Dolphins, talking to other campers, looking at the shrimp boats fising. That night we fired up the charcoal grill for hamburgers and a veggie burger for you know who.

I haven't said much about Bobbi on this trip. Edisto is such a natural place, there were birds of all kinds in the air and on the ground that kept her occupied all day. Her spot is in the front window where she can keep an eye on everything going on. At night, she likes the same spot but she is between the window shade and the window so she can see the activities in the campground.

Wednesday morning we spend as long as we could on the beach, then packed up, unhooked, dumped our holding tanks and were on the way home.

Finally, It looks like we will get to Edisto Beach State Park! Several times in the past we have tried to get reservations at Edisto, a beautiful SC State Park right on the beach about 35 miles south of Charleston. But with the new online reservations system, it is so easy to book these beach side campsites, that most of them are booked an entire year in advance. That doesn't leave much space for us folks that have to plan trips around work and other events. After the FMCA rally in February of this year, I decided to see if I could get a site at Edisto in May. Our wedding anniversery is May 25, so we always like to do a little something special on that date. So after 31 years of maritial bliss(?!) we decided on Edisto.

(Some pictures are posted here. View all of our pictures for this trip at our Dotphoto.com site.)

But even in February no weekend spaces were available that would accomodate our Bounder unless we opted to stay back in the woods a mile or so from the beach.. which is not where we want to be. Checking out the reservations system I did find a beach area site that looked reasonable and it was available on Monday and Tuesday. So why not go back to Charleston for the weekend and stay at Oak Plantation Campground, then move to the beach and head home Wednesday? Sounds like a plan to me, so Edisto and OPC were booked.

Getting Ready to Go.

I am not going to go into all the prep that had to be done to get ready for this trip. After the trip to Florida in February, we did decide to upgrade the toad, so I bought a 2004 Chevy Tracker from Helms Auto Sales in Monroe. The Helms' (Cousins Brad, Bennett, and Uncle Dub) had just what we wanted at the right price. The Tracker is 4X4, 4 Door, and easily towable behind the Bounder. I added a Blue Ox base plate to the tracker and a Blue Ox Tow Bar that is soooo easy to use. It stays on the back of the Bounder when not in use and is almost invisible when removed from the front of the Tracker and only takes seconds to remove. I'll try to write about that on our Miscelaneous page at a later time. I also added a rock guard skirt to the rear of the Bounder to keep road derbis and rock from chiping the paint on the front of the Tracker.

The Tracker is very easy to tow.. just put the 4 wheel drive in Neutral and you are ready to go!

With the water tank sanatized and partially filled, gas tank about half full (gas is about 17 cents less in SC), groceries, summer clothes and bathing suites, and the cat loaded we were on the road again. It was a much slower trip than I anticipated. It seemed like every elderly person in Camden and Sumter was out visiting or going to the Golden Corral for dinner. During one segment we followed a big ol' Buick that would not dare go over 35 miles per hour. And of course with the Bounder pulling the Tracker and traffic being what it was, I could not pass, so just settled in for the ride.

We pulled into OPC at about 8:30 PM. The office was closed but they left the directions for out site taped to the door with instructions to come back to the office in the morning to check in and settle up. The sites are very large - spacious is the right word, so we were able to quickly pull in, connect the water and electricity and settle in.

Here we are at Oak Plantation GC in between a couple of diesel pushers. 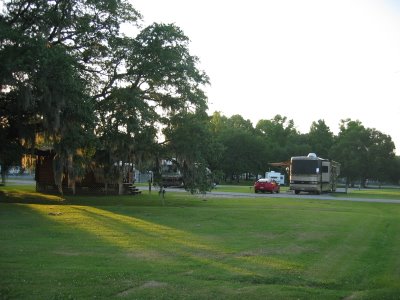 Saturday we slept a little late, and took our time getting out. About 9:00 I went to the office and checked in and paid up. OPC has what I think is a good policy for reservations and returns. They get a $20 deposit to make the reservation so if something happens and you can't make the trip, you are only out $20. A lot of RV parks get your entire fee up front and may or may not refund if you have problems getting there. I really like OPC. Here is their web site: http://www.oakplantationcampground.com/

Later we took a ride down to a little place called Rockville on the mainland west of Seabrook island, then up to James Island area. We then rode up the Ashley River Road, Hwy 66 past several plantations on the Ahley River. We decided to stop at Drayton Hall Plantation, the oldest continuously occupied plantation in America, according to the tour guide. (http://www.draytonhall.org/. This is a beautiful old place right on the river.

We were able to hear a short program on how slave labor was used to build the plantations and suport the economy of the area during the rice planting era. Then we took a guided tour of the house. The house has not been restored and is being maintained in original condition. 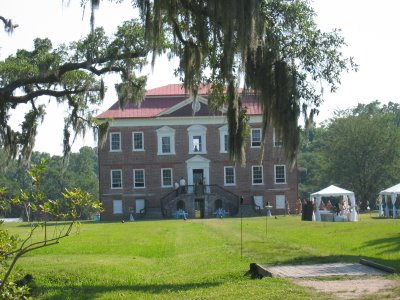 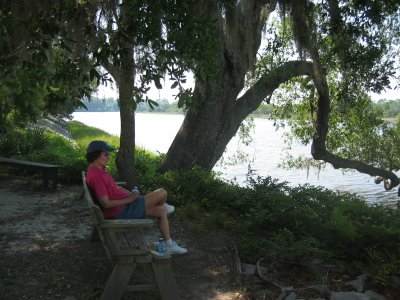 Chillin' on the Ashley River at Drayton Hall Plantation

Later we headed back toward Charleston and thanks to the recommendation of Roadfood.com we checked out the Anchor Line Restaurant. This spot is on the Folly Beach road just before crossing the waterway bridge from the mainland to Folly Beach. I say thanks to the recommendations because it does NOT look like a place you may stop without having some advanced knowledge. 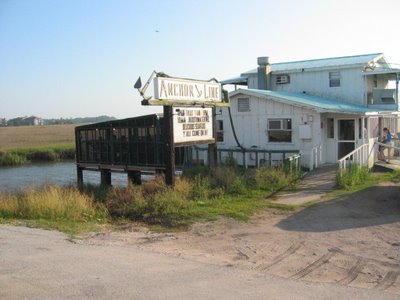 See what I mean? The tables are picnic tables on the deck out back. 3 or 5 guys are inside cooking up some of the best fresh fish and shrimp you can imagine.

Sunday morning we went to Fort Sumpter National Park. With all the trips we have made to Charleston we have never made it to Fort Sumpter. This was a great boat trip across the harbour with a beautiful view of the houses along the battery and the awesome new Cooper River Bridge. 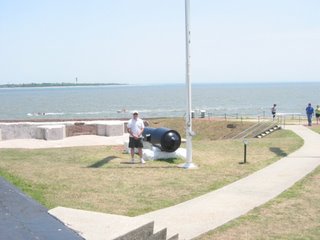 Here I am at the ready, waiting for the Yankee's to return...

whoooops, they are already there! Lots of 'em.

After the few hours to Fort Sumpter and back, we walked around the historic district for a while. We decided we should have a late lunch/early dinner in town then head back to the CG. We tried Hank's Restaurant, but he was closed until 5:00 PM.. and it only 3:00! So we walk back down to Cumberland on Meeting Street and stop in at Diana's for a good flounder sandwich and we had to try some of her Peach Cobbler! Man.. I'm glad we have a lot of walking to do for the rest of the day. Great meal!