These guys are Good!

OK, I know this is not specifically about taveling - unless you want to call traveling 20 miles from home to the Lancaster Motor Speedway traveling - but I wanted to share these bits of video our son shot when we visited the speedway this past Saturday night. The speedway hosted the Carolina Clash, a regional Late Model Dirt touring series.

My brother in law, Tim, his son Tanner aged 13 (and one of the most avid dirt track fans you'll find anywhere,) my son Tristan, and I spent Saturday evening at the track - watching the people, watching the cars, eating french fries, and drinking Gatorade. It's a really nice way to spend a summer evening.

The Clash drivers spend their spring and summer traveling to various dirt tracks across the Carolinas, Virginia, and Georgia putting on a real show. They race weekly, sometimes two races per week. They may race a double header at one track or they may race Friday night at one track, and another for the Saturday night show. Either way, this has to be a tough schedule for these drivers and their crews

At Lancaster Speedway, a 1/2 mile dirt track, they take just a little over 19 seconds to get around the track. That translates to averaging about 95 miles per hour around this tight circuit, with the actual speed much faster than that on the straights. The first video below is of the 1st turn at Lancaster during 2 of the drivers 2 lap qualifying runs. As you can see, they blast down the front straightaway, then throw the cars into the turn in a controlled slide. As they go through the turn they feather the throttle to keep the car in a controlled slide, gunning it as they are pointed down the back stretch.

(If you let the video play to the end, you can select from 5 or 6 more videos from Lancaster.)

If you think the single car qualifying for the race is exciting, wait until you see all 20 of them on the short track at the same time.

This past Saturday, Randall Chupp won a very hotly contested battle with Clash series leader Dennis "Rambo" Franklin. The 40 lap event saw Chupp jump to a lead with Rambo doing everything he could to get around him. What a show these two put on.

Other than the Clash touring series, Lancaster hosted it's normal weekly card, with several classes ranging from the "Young Guns" (young drivers working to gain some experience), to Late Model Crate (higher powered cars with experienced drivers) and several other classes in between.

If you get a chance to see these drivers at a dirt track near you, by all means go. It is an opportunity to see an exciting event the way racing USED to be, and still is at these local weekend dirt tracks.
Posted by Chuck and Pam at Monday, June 09, 2008 0 comments

I just recently saw your comment regarding Bluewater Key. I wanted to respond to you directly but you left no email address. Please let us know how you enjoyed your trip to Bluewater Key and the lower Keys. As you see in the posts below, we were back there a couple of weeks after you were. Feel free to send an email to us at Chuck @ Lomaxonline,com

We are also active on RV.NET with the nickname NCBOUNDER.
Posted by Chuck and Pam at Friday, June 06, 2008 0 comments

This weekend we were able to find a site at Huntington Beach State Park near Pawleys Island South Carolina. We had been there several times before, but this was the first time since 2006 (I think.) 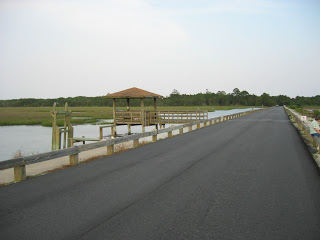 Huntington Beach SP is just south of Murrells Inlet SC, which is just south of Myrtle Beach SC. It is situated on the beach near Litchfield Beach and Pawleys Island. The campground is only a small part of this large state park. It is on an old estate that included the state park land and Brookgreen Gardens just across Hwy 17 from the State Park.

On entry to the park you pass the guard gate and cross a causeway that separates a fresh water lagoon from a salt marsh. The freshwater lagoon is home to several alligators that can easily be seen from the road and from a gazebo that is built on stilts in the edge of the lagoon.

Don't worry too much about getting eaten by an alligator... there is rip-rap all along the roadside about 8 - 10 feet down to the water. It would be extremely difficult for one of them to get to the top of the rocks before you could get away. 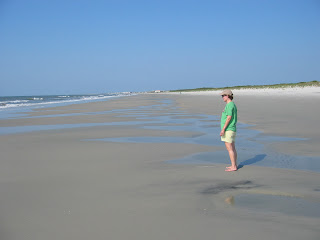 We left home Friday morning and arrived at the park at about 12:30 PM. After setting up the RV on our site (#19), we hauled the chairs and umbrella to the beach to spend the rest of the day.

There is a paved road in the park that goes to another beach access about a mile north of the campground. At it's end is a parking area for day use or for campers that want to drive of bike up there. From there, it is about another mile north to the Merrells Inlet jetty. We didn't go up there this trip.

The park has a nice store with the basic supplies and the usual Tee Shirts and other souvenirs. It also has a very nice and rather large day use area with a big parking area and very nice bath house and dressing area.

Another attraction is the Atalaya "Castle". The Castle as it is called, is a very large spanish style courtyard house built in the early 1930's by the Huntington Family. (See Atalaya link on the Friends of Huntington Beach web site.) You can tour the house, but it closes at about 5:00 PM.

Here are a few more pictures of the weekend. The full set of our weekend pictures is on our Huntington Beach 05-2008 album on Dotphoto.com 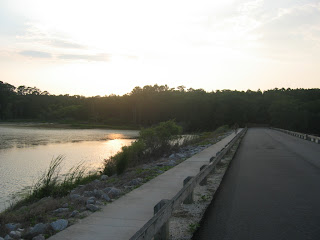 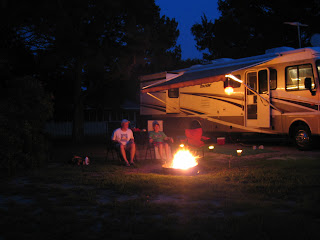 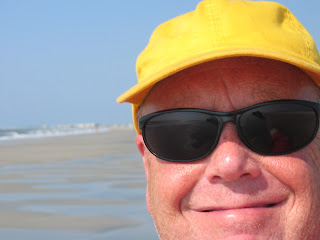 By the way, I have received comments from some of the readers of this blog with questions regarding the campgrounds we have visited...but with no email address. If you want further info regarding any of the places we have visited, PLEASE leave your email address, or you may email me directly at the email address shown on my blog profile. I will be more than happy to respond.
Posted by Chuck and Pam at Sunday, June 01, 2008 1 comments