Sunday dawned with the sound of rain pounding on the Bounder. I lifted the window shade just a bit to look outside to see a welcoming warm glow rising on the horizon. It said "Wal-Mart Supercenter - Lower Prices Every Day".

The trucks that were sharing the parking area with us were all gone now. Only a couple of coaches and a pick up truck with a 5th wheel camping trailer, along with a few early shoppers. I decided I'd wait until the rain stopped, then got up to make coffee and plan the day.

When I walked out to check on the Civic, I was shocked.. It was covered head to toe, bumper to bumper with mud, muddy water and dirt. I guess the little trip up the muddy road construction last night was rougher than I thought, and I didn't notice it in the dark.

Fortunately, there was a car wash next to the parking area. After coffee and breakfast, I went over to wash some of the mud off, and re-hitched the Civic. Ready to go.

I had originally planned to to down through the country to the Acoma Pueblo, but found out that they are closed for tribal ceremonies of some sort one weekend each year, and that happened to be now. And with the rain added to the experience of the road construction last night, I was a little concerned about taking any backroads. So we backtracked east on I-40 to I-25 and headed south toward Las Cruces.

I-25 is quite different from I-40; not as wide and not nearly as heavily traveled, particularly with regards to the trucks. As we moved south, we began to encounter steeper grades up over hills then down into canyons. In fact, several we went through had a airport style wind sock so you could be forewarned about any strong winds that may be rushing down the canyons across the road. Here is a picture, but I'm not sure you can spot the windsock at the bottom of the hill. 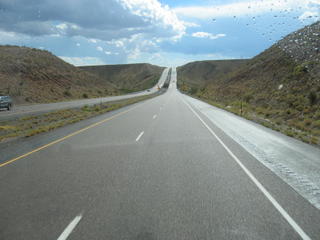 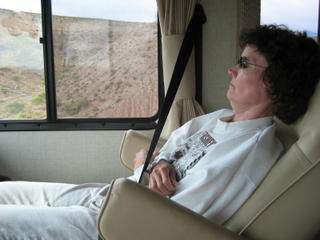 Also you can see in the picture that the road is still wet. We did continue to encounter showers off and on all day. While I am responsible for the driving, Pam provides occasional navigation assistance. Here she is busily navigating: 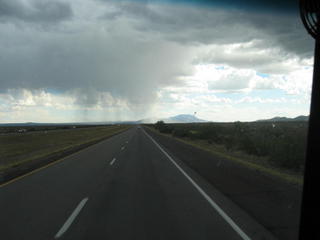 It's so flat here, that you can see the thunderstorms and showers miles away. As in the picture on the left, with the cloud dumping its water several miles up ahead.

Lunch time found us near Socorrco NM. We pulled into a rest stop for a quick pit stop, then back on I-25. Pretty soon it was time to feed the Bounder, so we found a fuel stop, a small truck/auto fuel stop/convience store at exit 156. It had big lanes for the trucks, but only one lane that would be easy to get the Bounder and Civic through. I decided I'd better walk all the way around just be sure it was clear, then pulled around and back through the fuel lane. 46 gallons later we were underway. I'm keeping in mind the lessons of our elders on this stop: never leave a town in the desert without a full tank.

I had been hearing about the quality of the New Mexico State park system, so we decided to spend the night at Elephant Butte Lake State Park near the town of Truth or Consequences NM. This proved to be a real oasis in the desert. 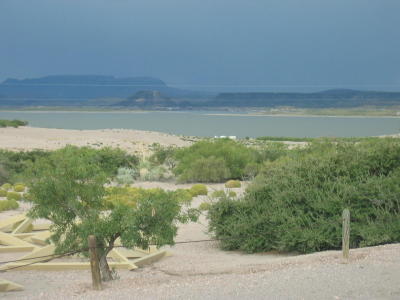 We paid our $14 for an "electric" sight for the night at the entry gate. The ranger told us to pick any 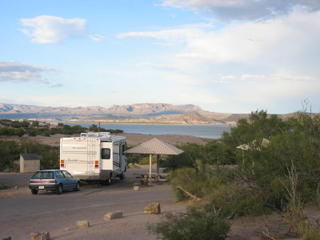 site that was open. Since this was off season, there were not many campers here. I didn't want to have to unhitch the Civic to back in to a campsite, so he directed me to an area containing mostly pull-through sights. We made a couple of passes throught the area and decided on a spot with the best view. (Picture Right)

The open spaces in the desert really seem to compress the distances. Looking at the picture you can see Elephant Butte in the distance. It's about 8 or 9 miles to the butte from here, and about one mile to Lions Beach, the beach just below our campsite.

We decided to walk down to the lake to take a look. Elephant Butte Lake is a man made lake on the Rio Grande river. It was built in the 1920s in order to provide irrigation for the farms in the fertile Rio Grande valley, and for flood control. It is one of several lakes on the Rio Grande in this area. Other than the campground, there are several very large marinas on the lake, but no lakeside development as we are accustomed to seeing in our part of the country. I think part of the reason is that there is just not the population in this area for lakeside homes. And the opposite side of the lake is protected by mountainous terrain so rough that there are just no roads in the area. 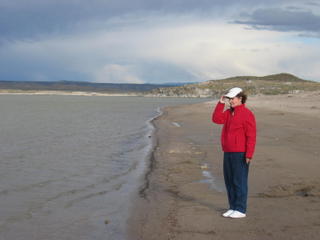 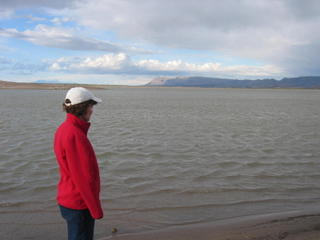 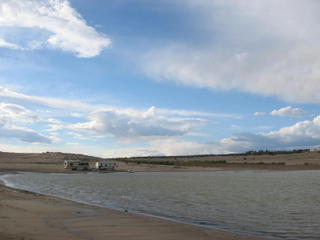 Much of the state park consist of primitive camping areas with no water or electricity hook ups. You can camp anywhere you wish in these areas. It was obvious from the sandy roads and tracks that a lot of campers in the area use this during the summer months. Here are a couple of RV's camped right on the beach.

After our little hike, we fired up the grill for a couple of Bubba Burgers, and a fake chicken (Veggie) patty and watched the sun set behind us providing a beautiful setting here in the desert in South Central New Mexico, followed by one of - no make that THE quietest campsite we have ever had. 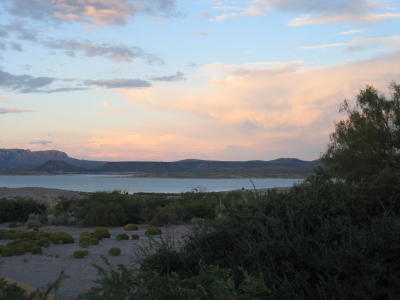 I LOVE Elephant Butte!! Nice, soft, sand and easy access for launching a boat from anywhere in the park. It'a a boater's paradise!