Navajo Country and beyond (UPDATED)

All of the pictures we made over the past few days are on the photo site. CLICK HERE to see them.

We left Sante Fe on Saturday morning and drove to Grants NM found a campsite, then took the Civic to Canyon de Chelly Arizona. Pronounced Canyon de SHAY, it is located about 70 miles northwest of Gallup NM.

Grants NM is in the middle western part of the state of NM about 50 miles east of Gallup. Grants is a cross roads for rail traffic. We saw freight trains on a regular basis. Of course, you can see for ever in that part of the country. It wasn't unusual to see a entire train, locomotive to caboose, miles away moving across the desert with the red rocks as a backdrop.

We were going to stay at either Red Rocks State Park, or at Blue Water Lake State Park. Both are nearer Gallup than Grants, so we decided that instead of driving all the way over there in the Bounder (at 7mpg) we would find the next available campground and take the Civic. We sere just approaching the exit with campgrounds when lo and behold - a Wal-Mart Supercenter appeared. Looked like a nice place to park to us! There were already a couple of other RVs and a few trucks there. I went in and asked permission from the manager and again were welcomed with a smile.

I guess its a good thing we did not go for the Red Rocks State Park. Later I talked to another RVer that did stay there. He said the park is located between 2 rail lines and approximately 100 trains per day pass there.. all blowing their horns.

With the Civic quickly unhitched we headed west to Gallup. This is really Navajo Country. Hwy 264 runs north and then west out of Gallup. Soon we are officially in the Navajo Nation. The next town, Window Rock, just across the border in Arizona, is the Tribal Headquarters for the Navajo Nation. We passed the tribal offices and kept going west toward the Hubbell Traiding Post. This trading post was one of the first trading posts in the area, established to sell general merchandise to the Navajos. In fact, Hubbell was one of the first to recognize the skill of the Navajo weavers, silversmiths, and potters, and encouraged them to make items for trade.

After passing the trading post, we turned north on Hwy 191, and began a 6-7 mile climb up to the top of a large mesa, where it runs near the eastern edge of the mesa top. In several places along this road, you can catch a view off of the mesa top out into the broad desert valley below. I have no idea how far you can see across this area, but in must be many, many miles. The top of the mesa was green enough that we saw areas where sheep were grazing. Once we saw a flock of sheep atteneded by a lone Border Collie.

Eventually we reach the mesa end and begin a quick steep drive down into the valley below and before long we are in Chinle Arizona, near the visitors center for Canyon De Chelly.

We arrived there just before 5 PM (they close at 5) so we were able to get in and pick up a map. I also wanted to avoid returning around and re-tracing our 60-70 mile route from Gallup, so I asked the park ranger about the road that loops around the north of the canyon and then heads back south toward Window Rock. Tribal Route 36 runs along the north rim of the canyon, then connects with Tribal Route 12. The ranger assured me that these were both scenic drives and good roads. There was some road construction on Route 36, but other than that, we would be fine.

We drove several miles down the south rim of the Canyon de Chelly stopping at a couple of the overlooks. This place is awesome: Sheer red rock walls several hundred feet high. Just as with the Grand Canyon but on a much smaller scale, it is a large gorge carved out of the flat desert by the Rio de Chelly.

On the canyon floor is peaceful green farmland watered by the river, farmed by the Navajo families that have lived there for generations. You can hike down into the canyon using several trails, or if you have a 4X4 vehicle you can hire a Navajo guide to take you for a tour. 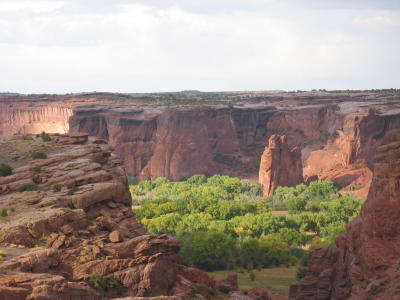 Here is a picture of Canyon de Chelly. Those sheer rock walls are about 600 feet straight down.

It had been raining most of the day, so the canyon farms looked very green and peacful as we viewed them from our purch way up on the rim.

In some of the cliff surfaces you can see areas where the rock had been worn away, forming a kind of shelter. Inside some of these were ancient cliff dwelling ruins. These were not built or occupied by the Navajo's but by a tribe that lived there thousands of years before the first Navajo's moved into the area. These first occupants were the Anasazis. Anasazi means "the ancient ones" in Navajo.

We decided we needed to move on before it was too late, so we headed east on Tribal Route 36. About 20 miles down that road, we saw a sigh up ahead warning about the road construction the ranger had mentioned. Then we saw another sign that said "Pavement Ends". Then another sign that said "No Pavement next 11 Miles"! Well, that shouldn't be too bad, maybe just a little bumpy? But the heavy rains earlier in the day had turned it into a quagmire! Cars were comming through from the other direction, so we kept going. I was thinking that surely this would not be this bad the whole 11 miles. But the further I went in the little Civic (about 8-9 inches of clearance over the road), the worse it became. We could see ruts that had been pushed in by large trucks, standing water in some places...what a total mess. About a mile of this and we had to do a U-turn. Fortunately the Civic has such a small turn radius we were able to get turned around and get moving pretty quickly, without stopping any of the cars behind us. So here we are 100 miles from our Bounder forced to return down the same road we spend the entire afternoon comming up.

Hey guys! I finally remembered to ask Tristan what your website's name was and I've been trying to catch up on your trip. It looks like you guys are having the time of your lives! And Bobby too? WOW! I'm getting ready to show this to Phil. I know you must miss Addie and Tristan, but it seems like they're doing fine. I couldn't help but notice that almost all the pictures of Pam on your main page are from the back, but Chuck, you are facing frontwards in yours. Haha!
Well.. I just wanted to make sure you had at least one comment on your page. I'm impressed with your easy layout. Your parents are really enjoying keeping up with the trip. Have a great day!