We woke up this morning with rain pounding on the coach roof. It was really coming down, and it continued until about 10:30. Even after that the sky was covered with heavy blue looking clouds and it continued to drizzle/rain off and on. With all that going on we decided to stay here another day and see if it cleared up a little later. Then maybe we would take the Civic over to White Sands.

I went to the office and paid up another day and soon after that it began to clear a little. It was really warming up some too.

By about 11:00 we were in the Civic headed up Hwy 70 toward the Organ Mountains and San Agustin Pass. Then we head down into the Tularosa Basin. This vast desert is surrounded by mountains to the east and west, and is the site of the White Sands National Monument, and the White Sands Missle Range. 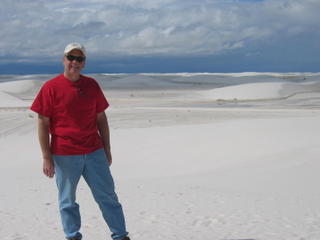 White Sands is a 300 square mile area of gypsum sand dunes in the middle of this desert. There is a paved road that turns off of Hwy 70 at the visitors center where you can see exhibits of the geology and history of the area.

The paved road goes a couple of more miles into the edge of the dune area, then the roads are hard packed white sand. The reason for that is the sand dunes are constantly shifting and moving through the area. The roads are continuously scraped and cleared. The white sand piled on the roadside looks like snow that has been plowed onto the roadside.

Here is a picture of the Civic parked in a picnic area in the middle of the dunes. The little picnic shelters have a cover over the tables. 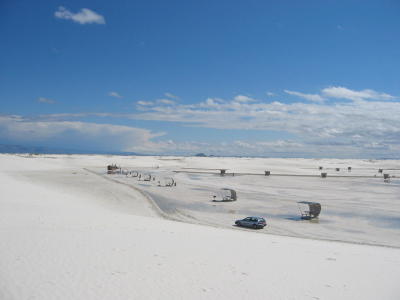 What really looked wierd is all of the standing water after the heavy morning rain. The gypsum sand is so dense that water stands in flat areas and in the parking pull offs and picnic areas.

We went as far into the dune area as the road took us , and then got out and walked up to the top of one of the large dunes to take a look around. There is white sand as far as the eye can see. Thats Pam coming up from the parking area. 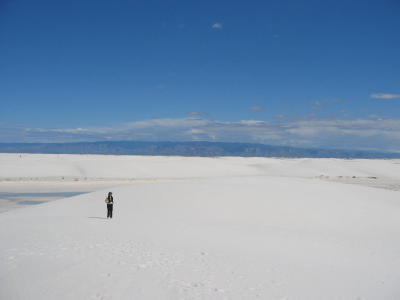 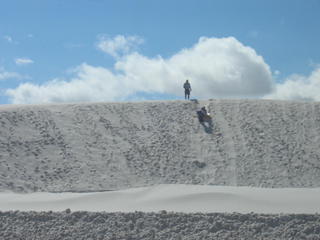 There were families playing on the dunes, with kids and those little saucer shaped sleds sliding town the dunes.

After we left White Sands, we continued north on Hwy 70 to Alamogordo. Sitting at the base of the Sacramento Mountains towering over it, Alamogordo is home to Holloman Air Force Base. It is a neat town with a large park in the center of town.

We stopped at Blake's Lot-o-burger for a quick lunch, ( I finally got a green chile cheeseburger) and then rode a little further north before turning on Hwy 82 toward the mountain town of Cloudcroft. It is a very steep road that winds up into the mountains. There are numerous pullouts so slower traffic can get out of the way of faster traffic. We got out of the way. At the top just before entering a tunnel through a part of the mountain, there is a scenic overlook with an awesome view back toward the west. From there you could see all the way across the Tularosa Basin back to the west and the peaks of the San Andres Mountains. You can also see the huge field of White Sands dunes streching miles and miles in the distance. 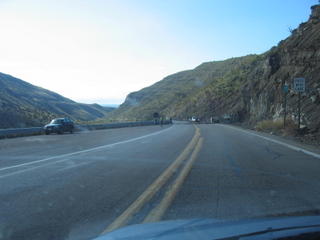 Over the pass and into the mountains we soon get to the small town of High Rolls. Up ahead we see red lights of emergency vehicles flashing. There has been a rock slide and the westbound lane is completely covered with slabs of large boulders. Several sheriff deputies were there directing traffic. Slowly we moved through and continued.

That area remided us a little of the NC mountains. There are plenty of green trees in the area, and valleys with ranches. Apples are grown in the area and there were numerous apple stands and antique shops. After going over the pass, we thought we had seen enough and decided to turn back. This area of high desert and rugged mountains is very isolated with few roads through the area, so it is difficult to make a "loop" back to your starting point without traveling hundreds of miles. So we turned back to retrace our track back to Las Cruces.

Back past the rock slide area, we see that they are still waiting on some heavy equipment to move the giant stones. (We did meet a large truck with a bulldozer blade on the front heading up as we were on the way down.) 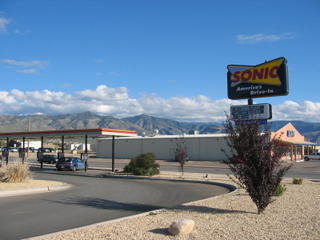 Back down on the desert floor in Alamogordo, we had a sweet attack and stopped at Sonic for some ice cream. Then it was back on the road to the RV park where we arrived about 6:00 PM.

We did a couple of loads of clothes in the laundrymat, and I put the tow bar on the Civic so I wouldn't have that to do in the morning.


I don't know when I will have internet access again, so this may be the last post for a while, possiby even until we get home. I have heard that some of the rest stops in Texas have internet access. Our plan is to leave Carlsbad on Monday and go through west Texas about half way to Austin, then get to Austin on Tuesday afternoon. While Pam visits and shops with friends on Wednesday, I want to visit the LBJ Ranch and Homeplace near Johnson City TX. Then we plan on leaving Austin Thursday and getting back home sometime Saturday. That way if there any delays, we will have Sunday as a extra day.

My real goal, is to try some authentic Texas briskett BBQ and see what all the fuss is about.