Across NY from West to East.

Next morning we were a little lazy and didn't get going until about 10:30. Like I said before we had all day today, Sunday, and Monday until 3:00 or 3:30 to get where we needed to be to meet our friends. I had always thought it would be interesting to follow the shore of Lake Ontario, so thats what we do. We cruise past more farms, vineyards, pumpkin patches. There is a lot of very large farms here, and beautiful homes along the Lake Ontario shore.

The shore seems to be somewhat eleveted from the lake itself. It is difficult to tell from the road. Maybe the houses are situated up about 10 to 20 feet above the lake? And there appear to be very few if any with any sort of dock for boats behind the homes. I wonder if that is due to the rough water conditions or ice in the winter. However almost every creek or small bay we cross has lots of boats in it.

One town we go through has a lot of activities going on. Cars are parked along the streets and people walking down the street toward the center of town. We are in Hilton, home of the Hilton Apple Fest. All kinds of food vendors and activities. This looks like it would be a fun stop, and the weather is beautiful. It's a little cool for us, but alot of the people we pass are wearing short sleeved shirts and shorts. Too bad we are not retired yet with unlimited time, we would definitely stop and spend a couple of hours here and get some lunch at one of the local food stands. But we press on.

We are nearing the outskirts of Rochester NY. We go through a smaller town called Greece. We see numerous signs saying "No Greece Soccer Complex." Looks like a politicial battle of some sort. And these signs were all over the place in people's yards. I later found out that there is a youth soccer club with over 450 kids on 26 teams in the area. The proposal was to build a complex with 25 fields and 1700 parking places on 120 acres in the area. Wow! What a large sports complex that would be. With all the traffic those soccer moms would bring, no wonder they want it stopped.

Through Rochester and along Highway 104, on through Osewgo at the end of Lake Ontario, and finally to I-81 south of Watertown NY. Soon we are purring along the interstate headed north...way north... way way north. It is not to long before we cant go any farther north in the US on this road. We can see the Canada border up ahead and we pull off the interstate and head East on Highway 12. Actually the road goes much more north than east. This is rather desolate country and the road follows the St Lawrence River. This is a massive river with a lot of cargo traffic. It is a very isolated looking landscape on the south side where we are, but across the river we can see several large manufacturing facilities. Not sure what they are or what they manufacture over there, but they do take advantage of the river transportation.

We are pretty soon in the Thousand Islands region. The road goes on and on, and we meet very few cars or trucks in this area. I'm sure that during the summertime there is much more traffic in the area, but not now! This area would definitely be worth a visit to spend a little time here. We'll have to put that on a future trip list. Soon we pass through Ogdensburg and are headed toward Massena. There is a state park near there right on the river - Robert B Moses State Park - that looks promising for the evening. As long as we get there before dark we shojld be ok. I don't like having to pull into a strange campground after dark, having to unhook the car and back into a campsite if I can avoid it.

Speaking of Robert Moses, I have to admit ignorance concerning his name. I had never studied NY history, but Robert Moses literally changed the face of NY - for better or worse some say is still up for discussion. Moses was a city/urban planner and archtect. Many of his work projects changed the cities and state in which he worked. For example, he is considered to be the "master builder" of present day NY City and some of it's suburbs such as Long Island. Although he never held public office, he was considered the most powerful man in NY during the 1930 - 1950 time period. He favored highways and road systems over public transportation and as a result many of the highways and bridges in the area now were his ideas. He left his legacy all across the state of NY. Thats why we went to Niagara Falls on the Robert Moses Parkway, and are considering staying in the Robert Moses State park tonight. His name is important to the history of NY.

So now that I know who Moses is, we begin to look for the park bearing is name. According to the trusty campground guide book, I go through Massena, turn left on Hwy 131, go 5 miles then find the park entrance on the right. I hope it is accurate directions because it is getting darker by the minute. We are on 4 lane divided highway in this part of Massena, so it shouldn't be hard to find our turn. Past the Wal-Mart, i see Hwy 131 ahead, make the turn and keep going....hopefully for 5 miles just like the book says. But as we go farther the road seems to narrow and it is looking less and less like we are going to find a campground in this area. On we go, and like a dummy I am not paying close attention to the odemeter, but clearly we have gone more than 5 miles. And there is nothing around here even remoetly looking like a campground or state park. I start to look for a place to turn around, but no such luck. There are a few small houses and moble homes in the area with narrow little driveways. Nothing to pull an RV pulling a car into to do a U-Turn. Now it has gotten completely dark, and this road seems to be headed toward the river. I'm beginning to have visions of comming to a dead end on a narrow back road with no place to turn around...and this road seems to go on and on. Then up ahead I see signs for a junction with Hwy 37. That was the road we turned OFF of after we passed the Wal-Mart a while back. The road we were on made a loop all the way around Massena and now we are about 10 or 12 miles back where we started. Well, at least now we know where we are, and I'm starting to think that that Wal-Mart parking is looking better and better for the night.

After another 15 minutes or so we are back at the Wal-Mart and the rain starts again. Thats it, no state park tonight. The Wal-Mart has a very large parking lot with plenty of room to spare. I find a spot, park, and run it to ask the managers permission. She was more than happy to have us stay the night there. We fixed some dinner and settled down for the night. This was one of the quietest spots we have ever spent the night, campground or not, and before we knew it, it was Monday morning and time to get going again for some more NY and finally Vermont.


Here is a picture of Bobbi that I wanted to share; Does she look like she owns the place or what? 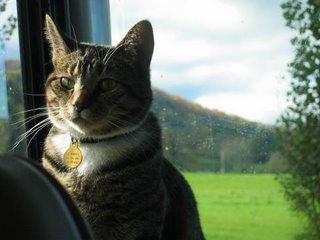 Great work. We at Addhunters shifted this service to a level much higher than the broker concept. you can see more details in our web page Property for sale Property in pearl