We start the day a little later than expected but by 10:00 AM we are on our way. Again it is sunny and then cloudy, but I immediately head up toward Smugglers Notch on Vermont Route 108. The "Gaps" or "Passes" in the mountains that are referred to down south are called "Notches" in the New England Mountains. Smugglers Notch is said to have gotten it's name due to sumggling cattle and other commodities through the area during the Revolutionary Way. However it recieved the name, it is quite a ride there. Route 108 is a typical mountain road winding and twisting up and back through the mountainside. On the way up we pass many people riding bicycles up, others walking or running.
This area is huge in its support of outdoor activities. There are many, many miles of walking, hiking, biking trails through out the state. The Stowe Recreation Path, actually provides a hiking/biking trail from downtown Stowe to the top of Mount Mansefield, the highest peak in the state. The Long Trail, is Vermont's own version of the Applachian Trail traversing several hundred miles of the mountains from the Canadian border to Massachuttes. So it is no surprise that we see many out for their morning ride/run/hike in the brisk fall air.
Suddenly we are at the top, the road narrows to only one lane in a couple of places and twists quickly between the mountain on one side and a few very large boulders on the other. That sure explains the "No Trucks with Trailers" signs we saw down below. A number of bicyclists have stopped here for a water break and a Kodak moment. This certainly is a Kodak moment spot. 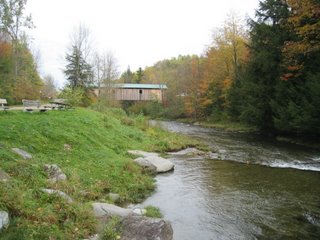 We continue on to Route 15 and go east toward the mountains, then north on route 109 to find our first covered bridge. The bridge is one of many in Vermont. Some are relatively new, some are old and have been restored and kept in use, and some have been taken out of service altogether. This one is just off Route 109 and crosses a creek up an unpaved road. Just next to the bridge is an overlook with a parking area next to the creek. After taking a few pictures and walking throuugh the bridge we move on.

For the next couple of hours we just meandered through some mountain backroads in the area with beautiful vistas seemingly around every turn. Shortly after noon we decide it is time for a short break. Up ahead we see a country store on the side of the road an pull in for a snack of 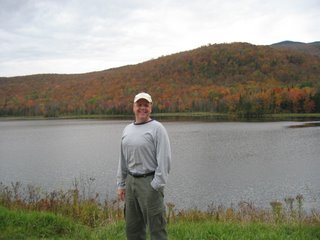 some sort. This is a very old country store but still very much a part of the local community, and definitely not a show for tourists. Inside on the old wooden floor stood racks containing everything from Pepsis and crackers, to canned vegetables, to fan belts, work gloves and snow shovels. They even had a hotplate in back with a couple of kinds of soup of the day, (chowder I think it was) and a lunch plate special. Several people had stopped in for lunch. We found the restrooms, bought a Coke and a bag of crackers, and went on our way. These stores were seen all over the area of Vermont we visited and are still seem to be the center of some of the communities we saw.
Headed back we see an unpaved road that looks promising, so we take it. For a mile or two it is a normal maintained gravel road, then seemed to get more and more narrow. Finally we see that it turns into a private road so decide we better get back to the main road. This little road took us through a beautiful mountainside with a meadow on one side with a creek running through it. With the sun out now shining through the yellow/red leaves of the many maples, it was a very pretty diversion off the main road.
Completing our loop brings us back to Jeffersonville. We vote to get lunch and we find a spot called 158 Main Bakery...and oddley enough it is at 158 Main Street. Home made tuna salad on fresh baked bread, was not enough for us vacationers, so we had to have a Maple Tart which was more of a Creme Brulee type of custard.. yummie!
After a walk around the rest of the town and through some of the shops and a antique store with a lot of interesting old stuff, we are on the roads again. Back tracking across some of the roads we have been on already for a few miles then into some new territory. We pass a lake with a scenic overlook. There are a few canoes out exploring the far side of the lake. The golden red leaves of the trees of the far side reflect in the water for a captivating view.
Soon we are in the town of Cabot VT, home to the Cabot Cheese Factory. We see the facility at the other end of town with a visitor center in front, so decide to check it out. There is a gift shop selling tickets for the cramery tours...last one for the day in 10 minutes. What luck. We sign up for the tour and sample some of the many cheeses made here in the Cabot Creamery.
Cabot is one of the oldest dairy cooperatives in 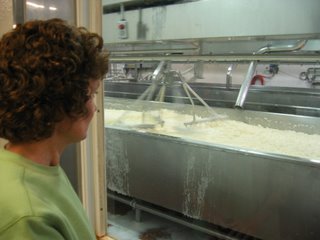 the country. They have expanded outside the local Vermont area and still have hundreds of farms as members. Their primary product is Vermont Cheddar with several veriations and flavors added. The 30 minute tour is very informative. A guide leads you down a hallway with large windows looking into the various areas of the creamery where the cheese is being made. Technology has only increased the volume that can be processed, but it is still the basic routine of cooking the mile, stirring to separate the curd from the whey, draining off the whey and compressing and draining the whey into cheese. Only now it is done in giant kettles and troughs with large stirring and pressing machines, allowing them to make hundreds of pounds of cheese blocks.
The thing that surprised me the most is the fact that all cheese is white. Well of course, milk is white, so why not. Some sort of color is usually added to the cheese to give it an orange color. Cabot adds a vegtable product for color to avoid any artificial coloring. Maybe other manufacturers to that too, I'll have to look into it later.
Soon we are headed toward Montpielier VT, the state capital. Montpieler is the smallest capital city of any of the state capitals. But after some of the small villages we have been through today, it looks like a thriving metropolis. For the first time, we see new houses in subdivisions being built. Most of the other areas we have been through are old farms and homes, or vacation houses. I guess the goverment and all of the associated service organizations keep employment going in this area. We pass the State Capitol Building with its gold dome set against the mountain in the background.
Soon we are back in Stowe arriving just in time to have dinner at the The Shed. This is a very informal place specializing in steaks, burgers, ribs, and BBQ. We enjoyed our meal there, just up the road a bit from the center of Stowe.
Back at the campground it is about 8:30 PM.. long day, lots of fun, now Bobbi is ready to play for a while.
Posted by Chuck and Pam at Tuesday, October 03, 2006