Wow, today is our last real day in Vermont. It seems as though we have planned and looked forward to this trip for months, and now it is almost over. There is still so much to do that we didn't get around to, but I guess that will leave it open to the sequel at some point in the future.
Today's agenda includes Ben and Jerrys, the Cider Mill, and hopefully, a tour of a sugar house. On the way to Ben and Jerrys, we decide to stop off at a scenic waterfall that we have pasted several times. It visible just as you exit I-89 at the Waterbury exit (Route 100 north). Each time we pass it, we decide to stop and take a look, 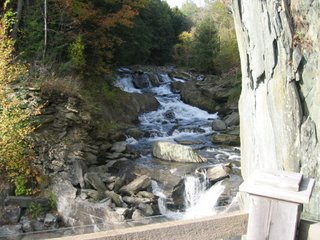 but never took the time. So now is the time. Traveling south on Route 100 almost to I-89 then left just before the ramp, then an immediate right through an older residential and commercial area of town. There is an old mill near the waterfall that has been converted sometime past into a reataurant. However there is a small park area just behind the mill/restaurant with a sign up inviting you to go and enjoy the view. Out back of the restaurant there is a platform built over the edge of the creek where you can see the water rushing down the rocks for about a 15-20 foot drop into the little pool right behind the mill. We are not sure what kind of mill this used to be as there is no signs or anything else we can see to provide that information, just the quaint view, and time for a couple of pictures.
A little later we are on our way to Ben and Jerry's Ice Cream Factory. This place is obviously a destination in this part of the country and when 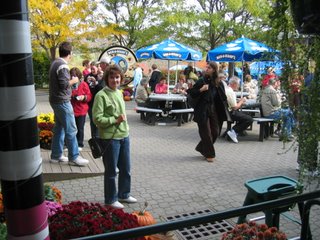 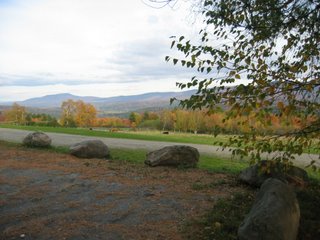 Trapp Family of "Sound of Music" fame. The place looks like an Austrian lodge and is a busy place here in the middle of peak leaf peeping season. We pause for a few pictures and continue on our route to Stowe.
Riding through the countryside north of Stowe in search of another covered bridge, brings us to the Foxfire Inn north of Stowe on Route 100. This is where we will have dinner tonight. It is an old house built in the 1800s and has been the home of one of the best Italian food restaurants in the area for many years.
The place is packed (luckily we had called for reservations earlier in the day) and we really enjoyed the atmosphere. Most of the rooms of the old house had tables set up as you would expect of a restaurant, but some were outfitted as private dining rooms for parties, and had a residential feel with large china cabinets, chairs, lamps and a large dining table. A couple of rooms simply were decorated as "parlors" for waiting with sofa, chairs, coffee table,and antique lamps.
I admit I picked this place due to a recommendation I recieved prior to taking this trip, and was a little dissappointed. The food was just not as good as I had expected. It was good, no question about that, I was just expecting more. Maybe we just had so much Ice cream earlier today that it "spoiled my dinner" as my Mama would say.
Now for the sad parting of ways. We have spend the past 3 1/2 days with our special friends from Texas and tomorrow we would have to go home. Their flight leaves at about noon, meaning they would have to leave for the airport at 9:30 or 10:00 AM. And we have a long way to go in the camper tomorrow too to get us back to North Caroling by Saturday night. So we will be saying our goodbyes as we drop them off at the hotel. It has been a wonderful trip, but we are sad to see them go.
But that just means that it will be a little closer to our next opportunity to vacation with them next year.
Posted by Chuck and Pam at Thursday, October 05, 2006