Most of the morning was spent at our auto mechanic of choice in the area.  The Chevy Tracker needed a little TLC and some maintenance.  The guys at Doc Imports in Monroe came through again as usual.  They found what turned out to be a simple problem and didn't charge much to correct it so I was back on the road.

The owner of the place is also an RVer.  He has a big toy hauler fiver and we chatted about the places we had been over the past couple of months.

Next on the agenda was a trip to my RV dealer, Tom Johnson Camping Center in Concord.  I need to replace the little latches that keep the Bounder's spare tire cover on.  I didn't call first assuming that they would either have the exact replacement part, or they would be able to point me to a suitable replacement for the latches.

I need to pay more attention to current events!  I had totally overlooked the fact that the second big NASCAR race of the year is at Charlotte Motor Speedway this weekend.

And Tom Johnson Camping Center is right across the street from the speedway.  In fact when the race is being held, they move all of their inventory to another lot nearby.  I was surprised to see that the area that was their inventory lot, has apparently been converted to permanent campsites.  So I don't know what that means for them long term, but it sure looks like the speedway is pushing them to a smaller and smaller space.

But the race fans are arriving in force, but it doesn't seem that the event is as big as it once was.  Years ago I went to several NASCAR races each year, including the October race at Charlotte.  Areas that once held  souvenir vendor shops shoulder to shoulder are now mostly empty.  Maybe they moved them to a different area that I didn't see, but it just didn't seem to have the crowd that it once did.

But the RVs and campers are arriving.  This is only Wednesday but many were settling in already and there was plenty of room for the many more that will show up in the next few days.

These first two pictures are directly across the road from the speedway. 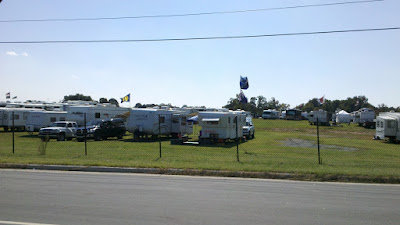 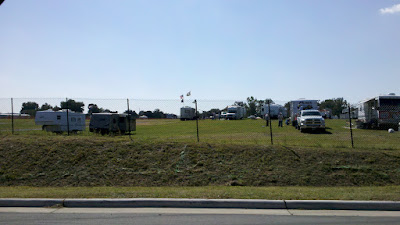 These next two are down Morehead Road past the speedway.. about a mile away. 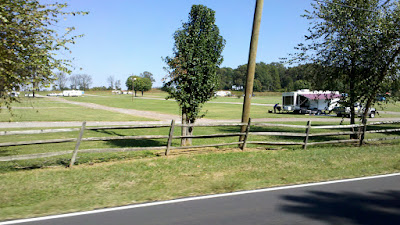 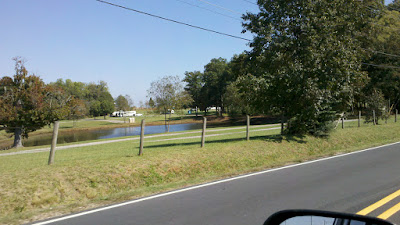 By Saturday, all these will be packed unless the crowds are really off.  Again, it's been 10 years or so since I last attended one of them.

In a way it kind of makes me miss the events a little.  They were exciting, particularly in the RV.  Lots of people watching, and lots of RV watching.  Believe me, at a NASCAR event you see all kinds.  You can see a multi-million dollar Prevost conversion sitting right next to a 1960's School Bus conversion... with every one partying and having a great time.

But there is just not much interest for me in NASCAR anymore.  I don't think the characters are allowed in the racing world now.   Every driver has to be a driver second, and a product salesman first.  It doesn't seem to matter if you can drive a race car as long as you can sell the sponsor's products.  Maybe Dale Earnhardt moved on just in time.

I returned home to another beautiful sunset. 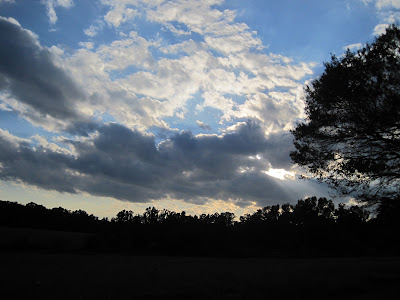