Back to the Barn

Our trip back north on I-95 continued to be uneventful and we are back home.  We arrived to some nice fall-like weather with a little cooler temperatures and even cooler predicted over the next week or two.

During August we had a barn built that will be the new home for our Bounder.  This is the first time we were actually able to get home, unpack the items we needed to unpack, and move the Bounder into it's new "stable".

We had decided back in the spring that we really needed to have a larger storage building, since the old one was full of junk and falling down.  After all, it was nearly 70 years old.  And believe it or not, our Bounder had been sitting outside in the sun, rain, and wind all these years.  It needed to have a home under roof.

I had looked at all these pre-fab metal buildings; I even had one guy come out and measure with the promise to get back to me with a final quote, which he never did. (I guess business is not so bad after all.)   Then after a severe thunderstorm outbreak in the area back in May, I saw one of those buildings sitting in the top of a big Oak tree not too far from here.

It was then that I got serious about having a pole type barn built. Thats when I also discovered that I could have a substantial barn built, with support poles 3 feet in the ground in concrete instead of metal railings sitting on top of the ground.  All for not much more than the metal barn would have cost.

The construction began around the first week of August with the layout and deciding exactly what I wanted and how it would be positioned on our property.  Once the poles were set, the trusses were ordered.  A week or so later they arrived and a crane was brought in to set the trusses in place: 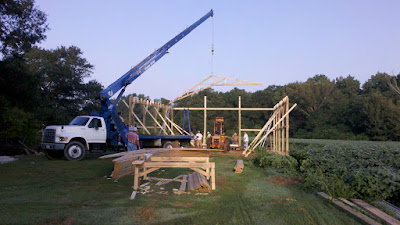 Once the work of setting the trusses in place began, it didn't take long for them to complete that part of the job.  With a couple of workers on each side and a couple in the middle on the scaffold, it went like clockwork. 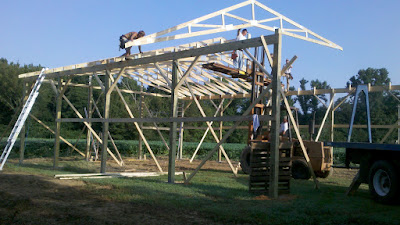 Before long, that part of the job was done.  Then it was time to start the longer job of framing. With the framing pretty much completed, it was time to start adding the metal, with the trim going on first. 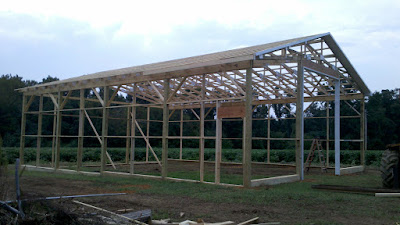 To be big enough to get the RV in and out as painlessly as possible, I needed a door with at least 14 feet vertical height and at least 12 feet wide.  So we decided to put the main door in the center with a personnel entry door on the side.  The main door will be a roll up garage door and the personnel door will be a steel double dead bolt lock.

Metal on the roof will be galvanized aluminum and the sides will be gray to match the siding on our house with white trim. 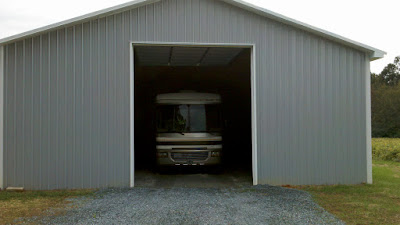 Notice the smile on it's face?