The Sting of Leaving Florida

After a nice dinner last night at The Reef on the beach, we prepared for our final leg home this morning.  We were in no big hurry as it is only about 7 or 8 hours north to Monroe.

Our two cats are just really into the travel routine and I think would be up to staying on the road as long as we want to. 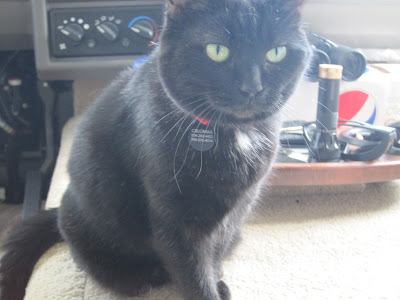 While we were packing up to go, we saw two of our camp neighbors out walking their cats, each cat with a leash.  I didn't get to the camera in time to make a picture.  We talked about how our cats may respond to a leash!  Nikki may do ok, but princess Bobbi would never stand for it.

With the utilities unhooked, Pam turned the a/c off so I could unplug from the shore power connection.  I flipped open the power pedestal lid to turn the switch off before unplugging.  As I put my hand in to turn the breaker off I touched the bottom edge of the pedestal lid and was immediately shocked!  My initial thought was there was a short in the pedestal wiring and I would need to report that to the office.  But then I saw two wasps flying out of the box.  I had been stung by a wasp and it did sting!

In 2005 I had an incident with a yellow jacket nest near our home.  I stepped on the nest without knowing it was there and was stung approximately 65 times.  Yellow Jackets are aggressive little buggers.  I passed out in the ambulance on the way to the emergency room and had to be given adrenalin to keep me going.  Since then Pam the nurse, has insisted that I need to keep an Epipen and Benadryl  handy just in case.  She says that I may be much more sensitive to wasp stings since that incident.

I kind of played that down and thought she was over reacting, but after about 15 minutes, my hand began to swell and my arm ached.  And this from just ONE sting.  We went ahead and got on the road, and by the time we stopped for fuel in Brunswick GA - about an hour and a half - my right hand and lower arm were swollen to the point i couldn't make a fist.  And, I had hives all over my arms and part of my torso.  Wow... I know now she is right about the super sensitivity.

After a couple more hours the swelling stopped and the itching subsided and we continued north bound on I-95.
We arrived back at home around 7:00 PM, just in time to unload the essentials before dark and get the cats situated.

PS.  My hand remained itchy all night but the swelling began to go away Friday afternoon.  I will certainly keep the Epipen and Benadryl with me every where I go from now on.