Fire in the Cuban Sky

Another beautiful day in the Florida Keys.  I cannot imagine anything more boring than being a weather forecaster in this part of the country.  If you pull up the Accuweather Forecast for the Florida Lower Keys, it's the same every day.  With a rare exception of course; as in Tropical Storm Isaac a few weeks ago.

We pretty much hung out at Bluewater Key  all day swimming and kayaking around Lower Sugarloaf Sound.

Tonight again there were storm clouds building many many miles out over the Atlantic south of the Keys.  Last night the same thing happened.  The clouds are so far away that you can see the lightning but never hear any thunder.  So far away that you can see several complete thunderstorms.  The lightning inside and around the huge clouds puts on quite a show.  Monday night, I commented to Pam that they are so far away that they are probably over Cuba.  And when I pulled up the weather radar online, sure enough, they were over the north coast of Cuba.

Tonight we saw some of the same type of storms.  Again so far away over the Atlantic that no thunder could be heard.  I decided to try to get a few pictures.  They are a bit grainy, but the best I can offer under the circumstances.

The first few are shots toward the East. 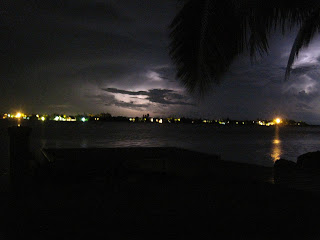 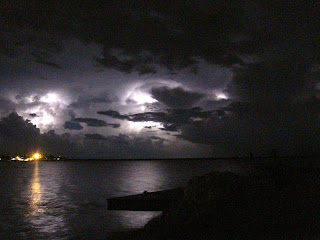 This one is more toward the South East: 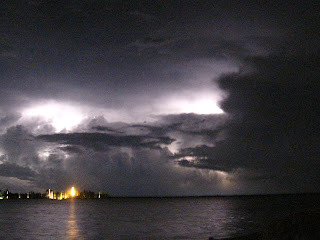 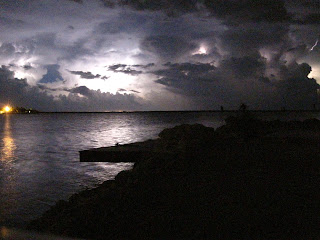 This shot is due South: 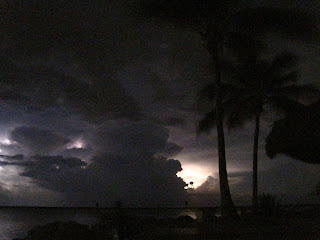 WOW ... nice pics of the night sky lightning .. but I'm surprised you can get a decent shot with the shutter open for 15 seconds. How's does that work when there's so much changing within the 15 seconds ?

Freddy C.. its just like using a flash, only the flash is the lightning. Since its dark, nothing shows up on the exposure until there is light. The only things showing on the pictures is the lightning flashes and the few lights from some of the houses across the water that I wanted included in the shots.