It's time to pack up from Bluewater Key and head back to North Carolina.  We had a beautiful sunrise this morning.  Then after getting everything picked up, packed up, and getting the cats ready for a day of travel, we are off and headed up US-1 back to the mainland.  It's time to put the Conch Republic behind us for this year.

We encountered very little rain as we made our way north on the Florida's Turnpike, then after Ft. Pierce, I-95.

I do have a question for any Floridian's living in the Keys:  Are tourist the only ones expected to obey the traffic laws on US-1 in the Keys?   We had several rude and nearly dangerous experiences with drivers on the Overseas Highway, both while driving the RV and while driving the Chevy Tracker during our stay.  Most of the incidences were relating to dangerous passing while I was driving the posted speed limit or even 5 MPH or so above the limit.  Do people think if they intimidate you, you will will break the law so they can get someplace a few seconds quicker?  I really don't get it.  Furthermore, in most of the cases, we pulled up next to them or right behind them again at the next stop light.

We stopped for the night in St.  Augustine Florida, at the Stagecoach RV park.  It is very near the interstate and is relatively easy to get in and out.  We unhooked the Chevy and decided to eat a meal out at a St. Augustine restaurant.  We drove over to the beach just as the sun was going down and made a couple of pictures.   All the surf and sand is quite a bit different from the calm, clear waters to which we became accustomed in the Keys. 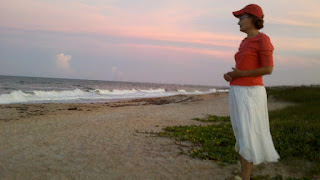 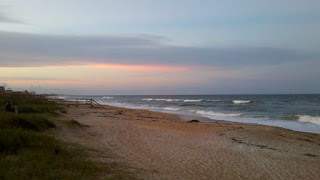 With the clear skys, the moon was perfectly visible in the early evening sky. 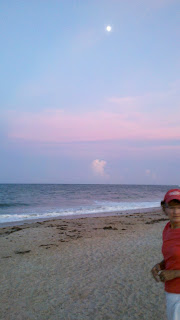 There was another couple on the beach that was able to take our picture for us. 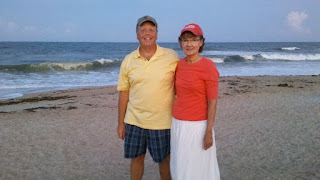 So tomorrow we head home after a full two weeks.
Posted by Chuck and Pam at Wednesday, September 26, 2012